That's the message from SimplyRFID, aimed at repeated misnomers about technology costs, as the company offers its latest tag priced at 3.6 cents in Asia, with the potential for 128 bits of memory to add data.
Dallas, TX, December 19, 2022
Newswire

RFID solutions company SimplyRFID is on an education campaign with several messages to radio frequency identification technology users: tags are lower in cost than most buyers think, the supply chain is easing, and some simple tweaks to inventory processing will help businesses leverage the benefits of the technology at minimal expense. The overarching point is simple: RFID has become inexpensive, and its effectiveness just requires the right approach.

To illustrate its primary point—the affordable cost of passive UHF RFID tags—SimplyRFID says its TR800 tag is now priced at about 3.6 cents in Asia. The company sells a handheld reader and an app for inventory tracking, priced at approximately $2,000 combined, and it has released a manual for users of its Wave software, designed to help them understand how the technology can be used for quick benefit.

To offer options for companies that want to track more than simple ID numbers, but that still require low-cost tags, SimplyRFID says it is now supporting high-memory 128-bit tags. In contrast with standard 96-bit-memory tags, the company explains, these tags could provide a limited amount of additional data when interrogated. SimplyRFID aims to address disinformation when it comes to RFID technology. "What we're trying to do is get the market to realize where RFID actually stands today," says Carl Brown, the company's CEO and president.

First of all, Brown says, the technology is affordable. "People are still wondering when there will be a 5-cent tag available," he says. Reaching the low cost of 5 cents per tag has been a mission for the industry for a decade or more, with the view that only that minimal cost would make the tagging of products in high volumes affordable. Tags are often sold at retail prices of 10 or 20 cents per tag, but SimplyRFID says this is not the most affordable option.

The TR800 tag is designed for most retail applications that can be printed and applied with adhesive to existing ticket tags. Its performance runs along the same lines as most modern RFID tags, SimplyRFID reports, with a read range of around 10 to 15 feet using a handheld reader. It measures 44 millimeters by 19 millimeters (1.7 inches by 0.7 inch) and can be attached to apparel labels or price tickets, as well as cardboard and plastic.

SimplyRFID sells the tags online, or as part of a package for its software customers. The pricing changes, but it averages around 4 cents apiece when the tags are purchased in Asia in quantities of 500,000 or more. Delivering the tags to the United States costs an extra cent per tag, meaning the tags would cost about five cents. Preprogrammed versions cost more—about 11 cents each in quantities of 100,000—and special paper requirements or upgraded materials can often increase that cost.

During the past year, Brown says, RFID tag demand has been high and has often outweighed supplies, in part due to global chip shortages, as well as the high-volume tag orders being placed by Walmart suppliers that seek to meet RFID tagging mandates. However, the supplies are catching up. Brown estimates tag order waits, which were once about six months, are now down to 30 to 60 days.

SimplyRFID, a software company that sells hardware sourced from other companies, is currently selling approximately 100 million tags per quarter. The TR800 is manufactured for SimplyRFID using chips and antennas from third-party providers, such as Avery Dennison and BoingTech. The tag came out six months ago and has passed Auburn University RFID Lab certification, and it conforms with Walmart's specifications.

Most standard UHF RFID tags provide 96 bits of memory to accommodate tag ID numbers. They were designed to interoperate with most standard off-the-shelf readers, which is not necessarily the case for higher-memory tags. While the latter could store considerably more data, including a batch number, a lot number, maintenance information and more, they cannot be easily read using standard UHF readers.

This year, however, SimplyRFID has adopted support for 128-bit tags, with its app and readers interoperating with these and standard 96-bit tags so that both can be interrogated in the same way, without the need for modifications. The value of 128-bit tags is their space for additional data, the company explains, though they do not have as much memory as some specialty tags built for use in aerospace and other applications.

For SimplyRFID, demand for 128-bit memories justifies support for these higher-memory tags so that companies have the opportunity to write additional information to UHF RFID tags, such as the expiration date or lot number of a product, which could help in the event of a recall. Users could, for instance, input a specific lot or expiration date into a handheld reader, then locate and remove those items from inventory. Some pharmaceutical distributors have been testing or deploying 128-bit tags so that medication labels could come with a small amount of additional data encoded on the RFID tag.

SimplyRFID's Wave software adoption requires some education when it comes to inventory management, Brown says. The company's Wave Inventory package comes with an inventory app priced annually at $995, and a Convergence Systems Ltd. (CSL) handheld reader for another $995. That's considerably less costly than a fixed reader deployment, he notes, and that's the idea. A handheld reader is intended to quickly provide retailers with the quickest benefit: an accurate inventory count.

Often, Brown says, companies fail to take advantage of what the solution offers. Inventory has traditionally been counted monthly, quarterly or during annual audits. Those using RFID technology, he adds, should be conducting daily or weekly inventory counts with handheld readers to gain the benefits they need, but they tend not to do so that often.

Frequent inventory counts are essential for those selling goods via "buy online, pickup in store" (BOPIS) models, Brown explains. Such online purchasing is only possible with an accurate inventory count, giving a retailer 100 percent certainty regarding where every product is located when it is purchased online. "Eight-five percent accuracy actually isn't close enough for the Internet," Brown states. Thus, SimplyRFID began writing a manual that is now available on its website. The directions it lays out for users are broken into steps to make inventory counting worthwhile.

According to Brown, the read process for a handheld reader tends to be easier than users expect. It's a matter of downloading the app into the handheld, then opening that app, holding the reader trigger and walking around shelves of merchandise. Those using the Wave app can check an "unscanned" tab once they have scanned the entire store or all the shelves. This tab will display everything the reader hasn't detected, and users can then give the inventory one more check against the unscanned items to make sure they didn't miss anything.

This, Brown says, allows for a simpler process than deploying fixed RFID reader portals or overhead readers. SimplyRFID's philosophy is that handheld readers are the fastest way to gain the technology's benefits. "Handheld readers have made all the difference," he states. "While fixed readers for real-time data and magic mirrors are interesting, they don't support the 90 percent of ROI that comes from better managing inventory." 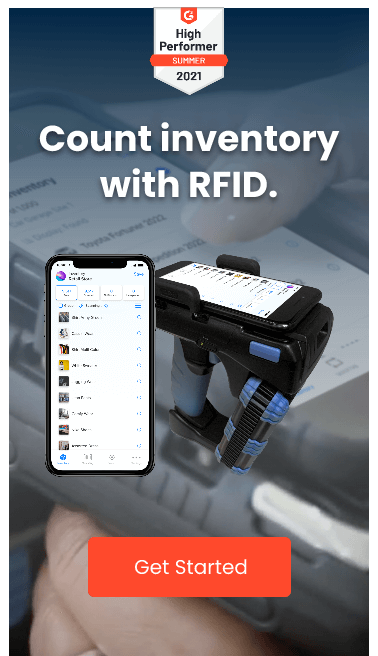 RFID is the fastest way to keep track of your assets and inventory. Our Wave Inventory System is everything you need to track thousands of assets easily from just $1,990! – or about $6/day.