Jun 22, 2020 - Eyewear wholesaler Frame Source Group (FSG), located in Addison, Texas, has launched an RFID-based solution for its optometrist and eyewear retailer customers that is designed to offer visibility to instore inventory. FSG's system, which leverages passive UHF RFID tags, handheld readers and software from SimplyRFID, enables stores and optometrist offices to automatically capture data regarding products as they arrive, and as they are displayed and sold, via daily inventory counts that average approximately three minutes to complete. That inventory data can then be viewed by the eyeglass brands that sell products to FSG, so that they can ensure frames are replenished at each store when needed, and so they can understand which products are selling and which are not.

FSG makes eyewear products in addition to reselling other brands' glasses and contacts to 1,600 retailers and optometrists around the United States and worldwide. Its customers often sell hundreds or thousands of frames at their stores but have limited inventory data regarding which frames are on hand, which have sold and which may be missing. In fact, inventory management for optometrists tends to be manual. To view what they have available for sale at any given time, those at an office must physically take each frame off the display wall and check its model and brand, then update a paper or digital record. That process is so labor-intensive that few busy optometry offices conduct inventory counts on a regular basis, and that lack of oversight leaves room for frames to end up missing, or to be sold and not replenished.

Additionally, some frames that do not sell may remain on a wall for long periods of time, consuming valuable display space. If frames are lost through shrinkage, a store often does not know when or how this occurred, so it can't address the problem. Without knowing exactly what is on hand and when it is sold, optometrists can lose frames and pay high price for those losses. With little idea of shrinkage or sales, a retailer's buyers cannot make appropriate purchases, which means having too much of some inventory, not enough of other products, and losses of which they are unaware.

Doctors that sell FSG's product have been reaching out to the company for a solution to some of these problems, says Greg Smith, FSG's sales manager. For one thing, he says, they often ask that a security device be attached to frames in order to ensure they are not taken out the door without being purchased. But existing security solutions tend to involve large hard tags that are too bulky for eyeglass frames, he notes, adding, "We can't put those on our products."

To solve this problem, the company has developed a holistic eyewear-tracking system known as the Advanced Inventory Management System (AIMS). It includes FSG's app, as well as cloud-based software access, handheld readers and product tags so that each item's status can be updated daily within a matter of minutes. Throughout the past few years, FSG's journey to an RFID-based solution took the company to numerous technology providers that could not offer a workable system. Smith then met with SimplyRFID, which released its Wave Version 1 app in December 2019 for inventory management with UHF RFID. "They customized it for us and our doctors," he states. 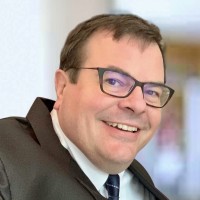 Carl Brown, SimplyRFID's president, says his company modified the Wave app in several ways to accommodate this application. "Around mid-January," Brown recalls, "I got a call from Greg [Smith], saying they were working on building a handheld system for taking eyewear inventory, but he wasn't getting the scan speed and performance he needed or wanted. I was certain our Wave app was the fast, reliable system he needed." Therefore, the firm adjusted the app to accommodate the procedural system of the frames industry.

SimplyRFID's backend data server, known as Pogi, was designed for speed, Brown explains. Whereas FSG's initial system design could take two to three minutes to synch 1,000 frames, the Pogi server was built to accommodate thousands of transactions per second. "With Pogi," Brown says, "we can synchronize about 2,000 frames per second from the handheld. This makes the inventory go quickly. No waiting on technology—everything is instant." The app runs on iOS devices and the Apple iPod Touch, and users can employ Convergence Systems Ltd. (CSL)'s CS108 handheld readers with a sled and a Bluetooth connection to link to the phone or iPod.

First, FSG sends its customers RFID tags that can be attached to products in the store as they are received. Each adhesive tag can be applied to packaging or wrapped around a particular pair of frames. Users can scan the barcode of that product to link its serial number and related information with the tag's RFID number. Once frames are tagged, optometry offices can conduct a daily inventory count. Workers can carry the handheld reader and walk past the display shelves, as well as scan items through drawers, cabinets or backroom storage areas.

Once the tags IDs have been read, the software will compare the collected read data against the inventory list, and thereby identify any missing or sold products. Based on reports from its customers, the company says it can scan approximately 700 items at a store within less than one minute. The software sends daily e-mails to indicate sold or missing frames.

The solution also comes with a cloud-based dashboard on which users can view all of their inventory in real time, along with categories according to brands or styles, and they can see which frames are fast-sellers and where there might be excess inventory. The system also enables retailers to automatically place replenishment orders through FSG, based on the inventory data.

For optometrists, the solution ensures that they do not lose track of frames or fail to stock popular models. However, Smith says, brands can also gain from the solution. Those selling their products to FSG can access the data to know what optometrists are selling, as well as ensure replenishments can be made automatically. According to Brown, SimplyRFID helped to customize this dashboard solution.

The system is now live at six optometry offices, with another 130 locations planning to deploy the system as well. FSG is making the solution available to its Vision Source network of 3,500 private-practice optometrists and other optometry offices worldwide. Stores can purchase the solution at a cost of $2,995 for an RFID scanner and a package of 1,000 tags. Following that, each RFID tag costs an additional 35 cents. The app costs users $99 a month. Only brands that sell products through FSG can access their customers' inventory data.

In addition, FSG is working to expand the system to include contact lenses. Trial lenses from each brand and for each prescription will have a passive UHF RFID tag attached to their packaging. Traditionally, those boxes have been difficult to count, which means a brand may go out of stock. "Contact lens companies know that whatever brand a customer starts with is the brand they will use for a lifetime," Smith explains.

For such a solution, each time a box of lenses is removed from the cabinet drawer, a fixed RFID reader built into the cabinet will identify that the item has been removed and can trigger replenishment. In addition, FSG reports, offices have been requesting RFID readers that could be installed in doorways to identify when frames leave a store, either through the front or back door. For optometrists and the brands using FSG as their wholesaler, Smith says, the eyeglasses app "will revolutionize the frame business."

RFID is the fastest way to keep track of your assets and inventory. Our Wave Inventory System is everything you need to track thousands of assets easily from just $1,990!